The offices of UNION Savings BANK are closed in observance of the following holidays during the 2022 calendar year.

Freeport, IL (September 21, 2021)   We are pleased to announce that Amanda Walter will lead the Investment and Trust Department of UNION Savings BANK as a Vice President and Senior Trust Officer. Amanda attended North Central College, studying accounting with an emphasis on conflict resolution. She is a graduate of the Cannon Financial Institute at the University of Notre Dame and has earned the professional designations of Certified Trust and Financial Advisor (CTFA) and Accredited Trust Operations Professional. Active in the community, Amanda serves on the Board of Directors of the Amboy Depot Commission and owns a successful small business.

Freeport, IL (June 7, 2021) – The Board of Directors of Union Savings Bank announced at the June 7, 2021, annual meeting a change in executive leadership. Richard. D. Wolfe, Chief Executive Officer and President announced his retirement after forty-three years of service to the bank. Wolfe held several positions at the bank during his career and served as President since 2012 and Chief Executive Officer since 2016.

Nicholas A. Gill was promoted to Chief Executive Officer, President, and Director. Gill graduated from Illinois State University with a Bachelor of Science degree in Finance. He holds the professional designation of Certified Community Bank Compliance Officer, attended the Graduate School of Banking and Leadership Institute at Highland Community College. Active in the community, Gill is the current president of Lincoln-Douglas Kiwanis and is an assistant football coach for Forreston High School.

Mary K. Vogel was promoted to Executive Vice President. Vogel serves on the bank's Board of Directors and manages Human Resources for the bank. She holds a Bachelor of Business Administration degree from the University of Wisconsin at Whitewater and attended the Graduate School of Banking and Highland Community College Leadership Institute. Vogel is a member of the Society for Human Resource Management and previously served on the board of directors for Freeport Sunrise Rotary.

About Union Savings Bank: Established in 1883, Union Savings Bank is an independent, full-service community bank serving the Northern Illinois area. They offer a broad range of banking services from, personal and business banking to investment, trust, and mortgage services. 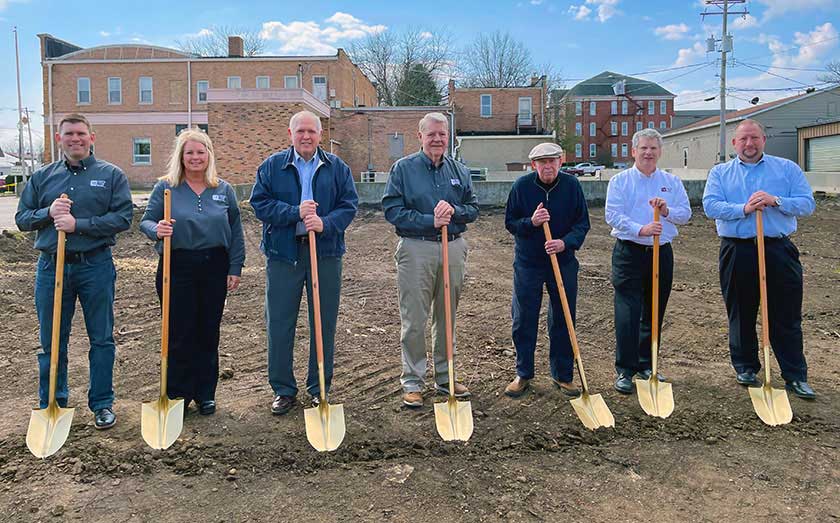 We are pleased to announce that we broke ground in late April on a new branch office in Mount Morris, Illinois, located at 1 W Hitt Street. Expected to open in the fall of 2021, the new office will feature two drive-through lanes with an ATM, ample parking, and safe deposit services. The branch will continue offering personal, commercial, and mortgage banking services.

Angie Good, Vice President and branch manager, shares that "It's an exciting time to be in Mount Morris with all of the new economic development. UNION Savings BANK is very committed to Mount Morris and Ogle County, and we are building a facility that grows with the community into the future".

Mount Morris area customers will receive information through the mail regarding the office's transition. For our customers with a Safe Deposit box in Mount Morris, please be sure to watch for time-sensitive communications arriving in late July.
Technical Support Scam Alert
We've seen a recent increase in the Technical Support Scam. In this scenario, scammers want you to believe you have a serious problem with your computer, like a virus. They want you to pay for tech support services you don't need, to fix a problem that doesn’t exist. They often want you to allow them remote access to your computer over the internet.
We're always happy to be help inspect a message or offer that seems suspicious.  Please contact a banker by phone for assistance.
Website Redesign

Exciting news! We had a major update to the design of the UNION Savings BANK website (homepage)  on March 4, 2021 at 2:00 pm CST. The new site will feature the following improvements: